by Sueli Brodin
Eugène Dubois Chair, lecture
Comments are off

Professor Katarina Harvati has been appointed Eugène Dubois chair for 2018. Professor Harvati was born in Athens, trained as an anthropologist in New York and has held the Palaeoanthropology chair position at the University of Tübingen in Germany for nearly a decade.

Neanderthals were our closest relatives, a sister species to Homo sapiens, that lived in Eurasia from ca. 400.000 to shortly after 40.000 years ago. Their extinction is one of the most discussed, yet unresolved, topics in human evolution. Prof. Harvati’s lecture reviewed the anatomy, behaviour and biology of these Pleistocene humans, and discussed their evolution, potential interactions with modern humans and eventual disappearance from the fossil record, from the perspective of fossil, archaeological and paleogenetic evidence. The most important extinction scenarios were presented, and the role of climate change on the Neanderthal lineage, as well as the possible competition with modern humans, were discussed. 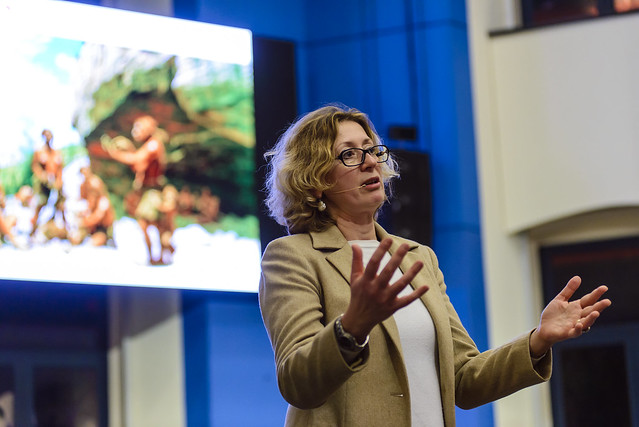