Prof. Mark Stoneking (1956) is the second professor to be appointed as the annually rotating Eugène Dubois Chair at Maastricht University.

It is often stated that humans have stopped evolving, because we instead rely on culture to adapt to changing circumstances. However, there is another view that holds that culture itself has influenced human evolution. Prof. Stoneking discussed these contrasting views, and provided examples of cultural influences on human genetic variation. 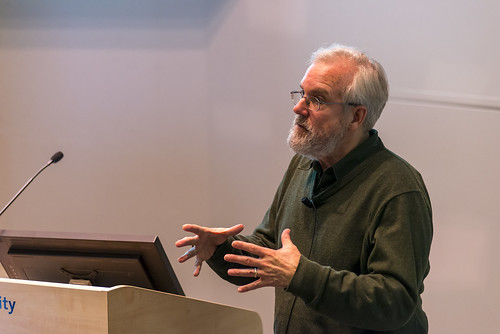 Prof. Mark Stoneking (1956) is the second professor to be appointed as the annually rotating Eugène Dubois Chair at Maastricht University. He is a geneticist currently working as the Group Leader of the Max Planck Institute for Evolutionary Anthropology, of Max Planck Gesellschaft at Leipzig, and Honorary Professor of Biological Anthropology, University of Leipzig, Leipzig, Germany.

Prof. Stoneking works in the field of human evolution, especially the genetic evolution, origin and dispersal of modern humans. He, along with his doctoral advisor Allan Wilson and a fellow researcher Rebecca L. Cann, contributed to the Out of Africa Theory in 1987 by introducing the concept of Mitochondrial Eve, a hypothetical common mother of all living humans based on mitochondrial DNA.